One of this summer's projects has been to turn a story I'd always meant to write into an e-book--more of an e-booklet, I suppose, since it's turned out to be a long-ish novella, rather than a novel properly so called.  I finished it last night (or early this morning), somewhat surprised to see that html skills I learned back in the 90's still came in handy. So it is now available from Amazon on Kindle: https://www.amazon.com/Fortunate-Empire-Leedeu-Worlds-Heart-ebook/dp/B074MQWF7C/  Here's the blurb: "Fortunate the nation that grows by marriage rather than warfare," a proverb says. In an age still new to steam and steel, the fledgling empire of the World's Heart has long overlooked the ancient city of Leedeu, far off to the east on the other side of the globe. The Autarch's decision to dispatch the empire's heir apparent, incognito, to serve as the first official Legate to the city only highlights imperial ignorance of the older culture. Confronted as soon as they leave their ship by a series of seemingly random deaths which local authorities insistently downplay, the Legate and his staff face increasing complications as they labor to navigate shadowy factions that have been struggling against each other since before the earliest legends of the World's Heart. Ultimately, only the Prince's submersion in the city's grotesque rituals resolves the tensions his legation has caused." 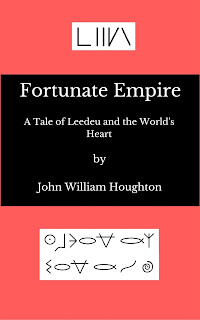